What are NFTs and how to use them? 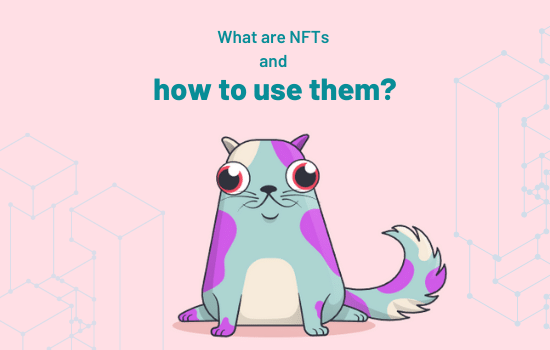 What are NFTs and how to use them?

In our series ‘web3 for beginners’ it is only logical that one of the episodes is featuring NFT. For crypto experts the basics of NFT are well-known, but outside this inner circle there is still a lot of evangelisation and knowledge sharing required, so here goes!

Let’s first start with the basics.

What is an NFT?

Ok, you probably read that it stands for Non-Fungible Token, but what does it really really mean? And did you know there are also Fungible Tokens?

When you search for Non-Fungible on Wikipedia, you’ll discover that it is “something unique”. The term “fungibility” comes from economics, where fungibility is the property of a good or a commodity whose individual units are essentially interchangeable and each of whose parts is indistinguishable from another part. Sounds like money, or gold? Indeed, when you have a 5 dollar bill and you exchange it with another person's 5 dollar bill, you still have a 5 dollar bill.

Also a lot of digital crypto currencies are fungible, the easiest example being Bitcoin. Exchange 1 bitcoin with someone else’s bitcoin: you still have 1 bitcoin.

With that being said, you understand that a NFT is not exchangeable. When you receive or buy a NFT, you can give (transfer) it to someone else, but the other person will not be able to give you something back that is exactly the same.

How is an NFT represented? Can I hold it?

You can’t literally hold an NFT in your arms, simply for the sake that it is a digital asset, like an image. The question would be the same as if you would ask if you can hold a PDF file in your arms.


So what are the forms or types of NFT that exist?

Its authentication is validated thanks to the protocol of a blockchain which gives it its first value. Non-fungible tokens are therefore not interchangeable, each NFT is unique.


What is the value of an NFT?

Here comes the “magic” factor: the value of an NFT varies according to what the general market believes it’s worth. Factors that influence the price are its intrinsic value, its originality and its rarity. Essentially we are back at economics, it is the game of supply and demand, like the art market or collectors, which defines the price of this digital asset. It’s like a painting: you can ask 100 people what they think about a certain painting and it doesn’t matter that 99 people say the painting is crap, when 1 person loves it and wants to pay a good amount of money for it. Of course, to reach a sky rocket valuation, with the game of supply and demand, it’s recommended that 99 people love it ;-)

In the “real” world an object does not necessarily need to be considered “useful” to have value. It may have sentimental value or it may be collected to be resold for a higher price to someone who wishes to own the asset. Think about Pokemon cards, many people collect these cards without even playing the game.

What can you actually do with an NFT? What is the utility?


The principle of an NFT is to certify the authenticity of something. That sounds pretty theoretical, therefore we’ll need to bring in some examples to transform it to something tangible, so you understand the utility of NFT is pretty infinite.

1. Proof that you are the legitimate owner of something

Everyone knows a notary. This person did a specific studies and is legally bound to literally note that you bought something valuable. It could be a house, it could be a piece of land, … Once the notary has noted it down (and did his homework to assure the buyer, seller and deal are legitimate) nothing can be changed anymore. Sounds like the blockchain, where minted blocks are immutable? Indeed!

For people that are active in video games, it’s a small step to “Buy a skin? Get a NFT!”.

It is also possible to certify the authenticity of an industry patent or contract using an NFT. For example, we write the contract and then put it online. After uploading, a unique code is generated and also an NFT. If this document is re-uploaded or modified, the unique code changes and we therefore know that it is not the original contract. Contract parties take note of the generated unique code and NFT and can ensure that everything is correct.

This utility is a utility where our Sayl Conn3ct solution really shows its muscles. When you connect to a website, an application or access a concert, festival or nightclub using a ticket or a QR Code, your digital identity today is stored in a database.

These databases generally store your email address, your password and a unique identifier (your registration number). Then the platform will generate a login session cookie so that you do not have to type your password again each time you visit the platform.

We could replace this cookie with an NFT: this token belongs to you and you can prove it using your computer or your phone (via an app like Sayl App or a custodial wallet). The advantage of the blockchain in this scenario is that it secures your data using cryptography and allows to greatly facilitate interoperability with many systems. No expensive technical integrations needed with the cash register system, the PIM or the system of the concert organization!

Indeed, if all the major blockchains and all the applications linked to these blockchains can communicate with each other easily and securely, this will facilitate exchanges. and you will no longer have to recreate an identity on each website or each application: a system interconnected to all the chains will facilitate the work.

An article on NFT can’t live without a section on video games, and certainly when there is a lot of commotion on this topic. Let’s again start with the utility, why would you need NFT in a video game?

Imagine if all of your stuff in an online role playing game (MMORPG) was tokenized (represented as NFTs) and you had the ability to trade your gear for cash or other stuff both in-game and out-of-game of the game in applications allowing the easy purchase and resale of these. Many new professions could be created: content creators (build a virtual boat), content traders, …

This logic could also easily apply to weapon skins as can be seen in Counter Strike: Global Offensive. CS:GO has a market supervised by Valve allowing players to exchange in-game items for money. Note that this is a closed loop system: the money can then be spent on the Steam platform to buy games or other equipment (skins) .

Counter Strike: Global Offensive today doesn’t use NFT, tokens and is not a blockchain based game. But the tokenization of these assets would greatly facilitate exchanges and would undoubtedly also make it possible to avoid certain abusive taxes / commissions since the transactions would not go through traditional payment service providers.


Still wondering why you need an NFT? Read this article on What is an NFT and why would I need it?

Is NFT just a hype?

To answer that, you can start by looking at Google Trends.

When you do your research, you will find out that NFT was getting some small traction in 2014, where the first collectible NFTs began to become more popular between 2014 and 2016 with virtual land that could be bought or sold, or even virtual cards like the famous RarePepes.

End 2017, the Cryptokitties project on Ethereum is often mentioned as one of the first projects that had really a success. CryptoKitties is a video game based on the ETH blockchain that allows players to adopt, breed and trade virtual cats . The game was a great success for its fun side in the midst of a speculative bubble on Ethereum. In 2017 we had the ICO bubble, then Crypto Kitties: all the means were good to talk about Ethereum, push people to use it, create transaction volume and as you can imagine … raise its price. This project literally saturated the Ethereum blockchain with so many transactions.

This is where the CryptoPunks come out on top. Initially created in June 2017 and limited in number to 10,000, they are the ones who have somehow revived the NFT trend last year (2021). Each punk was randomly generated and has its rare and unique side. There are only 9 out of 10,000 Punks with an alien head, 24 out of 10,000 with a monkey head, etc.

This trend of NFTs printed in packs of 10,000 has therefore exploded, everyone wants to create new CryptoPunks and we can see on the biggest NFT marketplaces that some projects have managed to pull out of the game like: Bored Ape Yacht Club; Degenerate Ape Academy or Aurora.

The big winners in this NFT hype: the NFT marketplaces which take commissions on each sale (2.5 to 5% generally) as well as the creators of these collections who can also earn royalties on the resale of each token.